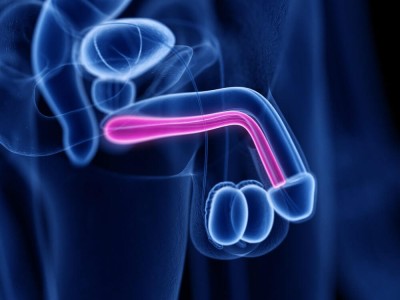 Curvature of the penis

It is normal for a penis to have a slight bend while erect, if it is not painful and does hinder sexual activity, you do not need to visit a doctor.

A significant bend that causes pain and makes sexual intercourse painful or hinders it all together is a condition called peyronie’s disease. This disease is marked by the development of fibrous scar tissue “plaque” inside the penis. It is unknown what causes this scar tissue to form but the main theory is that it is due to trauma or bending. Several autoimmune disease and genetic factors may also play a role. The trauma or bending can happen unnoticed, but it causes a bleeding in the penis that causes the formation of scar tissue. The penis is usually bent upwards, but it can be bent downwards to the left, right or a mixture of any of these directions.

Penile curvature occurs as a result of fibrosis in the white layer surrounding the cavernous bodies, which affects the expansion of this layer during erection and thus instigating the curvature and causing pain.

Penile curvature can be congenital or acquired.

A congenital penile curvature is when the penile curvature has been there since birth, usually the man can’t remember a time where the penis was straight during erection and it is usually not painful. As mentioned before sometimes genetic factors play a role.

Curvature of the penis Symptoms

Signs and symptoms of penile curvature may appear suddenly or may develop gradually over time depending on the trauma and genetic factors that contribute to the formation of scar tissue. Plaques of fibrous scar tissue form under the penile skin in an elastic membrane called the tunica albuginea that contributes to keeping the penis stiff during erection. The scar tissue makes the penis less flexible and pulls it in a certain direction resulting in the curvature.

The scar tissue makes the penis less flexible and pulls it in a certain direction resulting in the curvature, this may also make the penis appear shorter.

The lack of elasticity in the tunica albuginea can cause pain in different levels of severity while the penis is erect.

Penile curvature usually resolves on its own anywhere between days up to months but if remains the following can be done.

Having a penile bend can affect a man psychologically. Especially if it happens in adolescents and young adults, this age group is usually unexperienced and form an image of how their penis should look based on what they see in the media or the male locker room. They usually also do not know the issue can resolve with time. If it starts preoccupying their mind and brings insecurity it might be a good idea to seek a specialist for help. In men with an autoimmune disease that can exacerbate peyronie’s disease this may even be essential.

Several forms of medication can be given to relief symptoms, slow down scar tissue formation or induce clearing it up. Which treatment will be given and in the form of injections or orally depends mainly on the cause of the penile curvature, the extent of pain and how it affects the patients’ quality of life.

If all conservative approaches of therapy have not been successful or improved the patients’ symptoms or quality of life surgery should be considered. Surgical approaches are mainly aimed at removing or reducing scar tissue focusses (plaque) or by restoring the curve by removing tissue on the opposite side. These surgeries are safe and complications due to blood loss are almost nil. However, surgeries could on the long run be the cause of more scar tissue formation, it can also affect the penile size bringing with it more psychological trauma.

Surgeries are only indicated if the pain while erect is unbearable or sexual intercourse is compromised, considerably affecting the quality of the patient’s life.

Bedaya Hospital has a team of andrologists and urologists that will work together to come to the best treatment plan for your penile curvature and the negative effects it has on your life!